“It’s the most wonderful time of the year!” Daddy sang as he cleared the table. The Christmas tree looked very pretty in the corner. Little fairy lights twinkled all around the house – even in the kitchen. 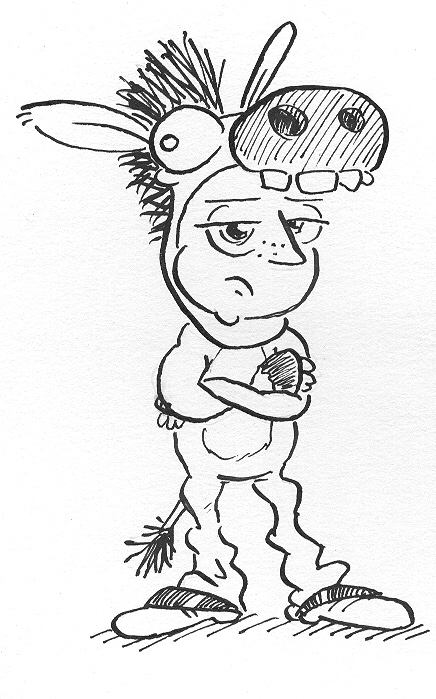 Molly sat, with her arms folded, at the table.

“IT’S NOT FAIR!” she said – to everyone who could hear (including the fairy at the top of the tree!). “It’s not fair! Annabel is Mary, Lily-Jane is an angel, and I’m a donkey. A donkey!!”

“Now the donkey had a very important job to do,” said Daddy, patting her head. “The donkey brought Mary to Bethlehem to have little baby Jesus.”

“But being a donkey – it’s just not a very girlie thing to be!”

“MAX! Don’t be silly!” Molly said as she ran upstairs.

This was the first year Molly had decorated her own room for Christmas. She even had a little tree in the corner, and paper chains along her window. She opened her bedroom door.

“NO!!” she cried! The little tree had toppled, and the silver reindeer decoration that Great-Aunt Morag had sent in an envelope marked ‘fragile’ was lying minus an antler and one leg in the middle of the floor. She grabbed the silver reindeer and stormed back downstairs. Max was hiding behind Mummy.

“He knocked over my tree and broke my reindeer called Fragile,” Molly explained to Mummy.

“Max?” asked Mummy, turning round behind her.

“Didn’t mean to,” he said, and Mummy believed him – as his eyes were filling with tears. “Sorwee!” he said, and tried to give his sister a great, big hug. Molly was not in a forgiving mood, and did not want a hug. She pushed him away.

Just at that moment the doorbell rang. It was Granny and Granda K. They had arrived to take Molly and Max to see Santa in his cottage.

“Now get your coats on, and be good,” whispered Mummy.

An hour later Molly was singing, “It’s the most wonderful time of the year!” as she walked round Santa’s cottage.

It was amazing! Santa came down the chimney. Molly and Max got to speak to him for ages as he sat by the fire. He asked what they would like, told them to leave a carrot for Rudolph and warned them not to fight!

“He’s the real Santa!” Molly said to Granny K, as they walked out the door. The children’s eyes grew wide as saucers. All around were fairy lights, and far above were twinkling stars and a full moon beaming down onto the magical cottage. A little elf called Lazy-Bones was feeding four white geese by the pond. Beside the pond was Rudolph and Santa’s sleigh. Rudolph’s nose wasn’t red, as it wasn’t cold enough yet.

Lazy-Bones said “Goodnight,” as they walked round the corner towards a wishing well.

“You have elf ears!” Max whispered out of the blue to Molly.

“What are you going to wish for?” Granda K asked as they stood by the Wishing Well.

Molly had no problem deciding what to wish for. She looked at Max who had called her Elf Ears again. She closed her eyes and concentrated hard.

“I wish I didn’t have a brother. I wish Max would disappear!” she thought. She was rather disappointed when she opened her eyes and discovered he was still there!

“Why do the days in December seem the longest of all?” thought Molly.

It felt like Christmas was NEVER going to come! Molly thought she was going to explode!

She couldn’t believe that morning when she went to open the advent calendar and discovered that it said ‘23’ on the little door. Just two more sleeps to go until the BIG day!

The 23rd was a Sunday. Mummy noticed Max had a bit of a cough as they drove to church. Max didn’t notice his cough! He was so excited about being a shepherd that he insisted on putting on his dressing gown, and a tea towel on his head, kept together by Daddy’s tie. He had also insisted that he didn’t want to bring a cuddly sheep, but Dino, his big cuddly dinosaur instead!

Molly was delighted that she was an angel in this Nativity play. Though being a donkey in the school play hadn’t been as bad as she thought it was going to be! She enjoyed being the centre of attention when the choir sang ‘Little Donkey’ and Mrs Mac made coconut halves sound like donkey hooves! In fact she even met a new friend at the manger – a little boy in Primary 1 called Sam, who was a sheep.

Today, Molly looked so angelic at the front of church in her silver foil wings and tinsel halo. There were several shepherds – but Max was the only one with a dinosaur! The children said their lines and sang their songs beautifully. They even blew candles out on top of a huge birthday cake, to remind everyone in the audience that Christmas is Jesus’ birthday. 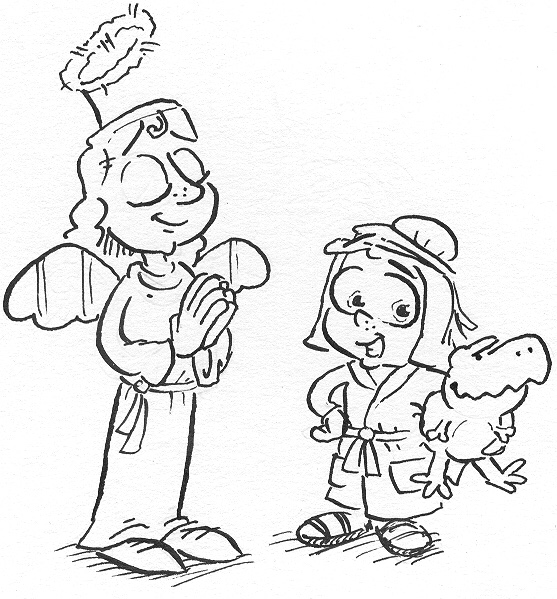 To finish, everyone in the church sang ‘Silent Night’ together. After Pastor Dee closed the service with a prayer, the only sound that could be heard was the sound of gentle snoring, from beside the manger. One little shepherd was sleeping. The sleepy little shepherd was fast asleep, curled up, clutching Dino.

The rest of the day went surprisingly fast and soon it was bedtime.

Max was coughing and coughing in his room across the hall. Mummy was with him, giving him ‘magic puffers’ (as he called his inhalers) to take away his ‘wheezes’. Dino got some magic puffers too!

Molly soon fell fast asleep, looking even more angelic than she had earlier that day. She was dreaming of the next day – Christmas Eve – the most magical day of the year!

Next morning Molly jumped out of bed! She was SO excited! She flung open her curtains – the fields were all sparkling. Jack Frost had visited leaving a silvery trail!

She would go and waken Max, and together they could go and open the final door in the calendar. The door that said ‘24’ was bigger than the rest! And Christmas was the only time of the year that they were allowed to eat chocolate before breakfast!

But Max’s bed was empty. When she went into Mummy and Daddy’s room, no one was there either. Max wasn’t watching TV in the living room. The whole house seemed strangely quiet. Molly’s heart was pounding, as she went into the kitchen, where she found Daddy having a coffee, alone. Her eyes grew wide, then filled with tears.

“I made a wish that Max would disappear,” she sobbed. “And it’s come true.”

Daddy looked bemused, as he gave her a big hug and explained. “Mummy had to take Max up to the hospital last night. His wheezes were too bad.”

That news made Molly sob even louder.

“He’ll be OK honey, but I’ve just had a text from Mummy to say he’ll be in hospital today and tonight too.”

Molly’s mind processed the information, while she continued to sob. “But … But … it can’t be Christmas without Max. Santa can’t come when Max isn’t here,” she cried. “Can you phone Santa and ask him to come to our house, to Lilac Cottage, when Max is better?”

“Well maybe someone at the Cottage where you visited Santa would be able to get in touch with him,” suggested Daddy.

“Could you phone them now please, so they can catch Santa before he starts loading the sleigh?” asked Molly.

“OK – but can you eat some toast while I try to sort that out?” asked Daddy as he set an extra buttery slice of toast in front of her. She took a tiny, tiny bite and tried to stop sobbing. Max would be OK, because Daddy had said so. And she knew that Daddy would be able to sort Christmas out – even if there was a huge task like asking Santa to come to their house on the night after Christmas Eve!

The rest of the day, Daddy and Molly were very busy, collecting the turkey, buying brussel sprouts and Shloer to drink. Molly helped him wrap presents for Mummy. She wondered what Christmas presents she would get and what surprises Santa would bring.

But the best Christmas present that Molly got on Christmas Day was getting Max home, just before dinnertime! She gave Max the biggest hug ever.

That night they sprinkled reindeer food on the doorstep of Lilac Cottage. And just as Molly had suggested, Santa came back, after travelling across the globe, and visited their house twenty-four hours after the rest of the planet!

View all posts by curlysue028